Balaji Wafers has become an easily recognized name in numerous pieces of India. Chandubhai Virani, the 60-year-old originator, and executive of Balaji Wafers Private Limited, has a story that can motivate us all. He began making potato wafers in 1982. His was a modest beginning with the speculation of just Rs 10,000, at his own home. His organization at that point proceeded to turn into a huge brand that had a turnover of Rs 1,800 crore in 2017. 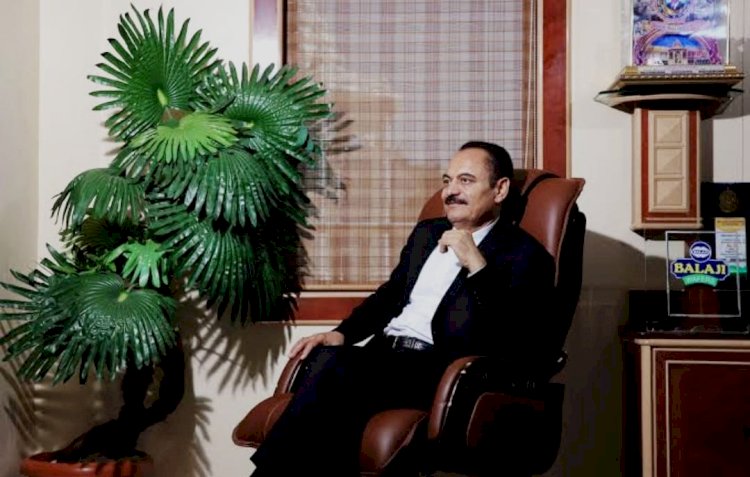 Chandubhai Virani, born on the 31

A very humble personality, Chandubhai Virani is a down to earth person among his brothers. He prefers to lead a simple life with a low profile. His dressing is very modest, he is generally seen wearing a simple white and green checked shirt to his office.

This owner of Balaji Wafers likes to spend his free time in the lap of nature, admiring nature’s beauty. This interest of Mr. Virani often begins and ends at his farmhouse. This is the reason behind his business-pleasure trips. His international lovelies in the American deserts, valleys, and jungles.

His other likes include reading literature related to agriculture and eating home-cooked food. His favorite cuisine is Kathiawadi food.

Rains were infrequent in 1972. As a result of this, with every passing day farming became more and more terrible. To cope up with this worsening situation, his father sold their ancestral land at INR 20,000. He gave that money to his brothers and asked them to go to the city and do some business with it.

They all migrated to Rajkot. Belonging to a background of farmers, they decided to start a business of fertilizers and farm implements. But luck did not favor them. They were deceived due to a lack of knowledge and experience. Someone supplied them with duplicate fertilizers. This made them lose all their capital. They had no options left for earning a livelihood but their hopes were still high. To fulfill the basic necessities of life- food, clothing, and shelter, Chandubhai at a tender age of 17 along with Bhikhubhai started to sell refreshments in Rajkot’s Astron Cinema. From ticket counter to the doorkeeper, they managed every department religiously and worked tirelessly the whole day.

Due to their efforts, Govindbhai– the cinema owner, handed over the canteen to them on a contract basis in 1976. This is where the story began!

The entrepreneurial journey of Balaji Group

This group was founded in Rajkot, Gujarat, India. It is one of the leading manufacturers and distributors of potato chips and grain-based packaged snacks such as-

They started as a small cottage industry. And now it has evolved into a Multi-Million Dollar Company of quality products with an indigenous taste. Till 1982, i.e. for a time period of six years, they ran the canteen. After gaining experience, they decided to continue this as their core business and officially established Balaji Wafers in 1982 with an investment of INR 20,000.

The wafers which were served by them were sourced from the only supplier in Rajkot. They used to serve these crackers along with homemade toasted sandwiches by their wives. Their supplies raised higher and higher. Precisely, 80% of their major sales for refreshment constituted potato chips. But the sad part was that the suppliers were unable to meet their demands. So, without much commotion, they started making wafers at their home too.

The making of the wafers at their residence continued till 1989. The homemade wafers were supplied in and around the city of Rajkot. In 1989, the Balaji wafers took the biggest step in their life. To fulfill the increasing demands of the masses, they decided to invest INR 5 lakhs and set up a plant in Aji, ‘GIDC’ in Rajkot.

Afterward, in 1995-96 another plant was installed. Having future plans in his mind, Chandubhai installed a more technologically advanced semi-automatic plant. It had a capacity of 250 kg of potato chips per hour.

History repeats itself! Within a few years, demand began exceeding the supply again, even when the plant was running at full capacity. Hence, there was a desperate need for better technology. And as it is said, “Necessity is the mother of Invention.” Therefore, this need gave birth to Gujarat’s first fully automated potato chips plant in 1999, installed by Balaji Wafers. This was followed by another automated potato chips plant in 2003-04 in Vajdi district with a capacity of 1,200 kg per hour.

Sales grew tremendously. By 2006, Balaji took over a 90% share of the potato chips market in Gujarat and a 70% share of the namkeen category. In addition to these, the markets in Maharashtra and Rajasthan continued to grow at a high pace too.

Chandubhai was highly motivated by the fast growth of his industry.  Balaji Group in 2008 set up yet another plant in Valsad. It had a processing capacity of 8,000 kg of potatoes per hour, thereby producing 2,000 kg of potato chips per hour. This plant is one of the largest potato chips making units in Asia. The plant was sourced from foreign countries. Presently, they have potato chips manufacturing units in Rajkot and Valsad. When taken together, they produce at the rate of 3,400 kg of potato chips per hour.

When the whole Balaji Group is taken into consideration at once, the speed of production is around 450,000 kg of potato chips per day and 400,000 kg of namkeens per day. Their network comprises of 550 distributors. Also, their products are sold in 400,000 retail outlets across India.

Balaji Group also has a joint project with the ISCON Group. SP Chips Potato Pvt. Ltd is the producer of potato flakes near Boriavi, a small village in Gujarat. It holds a plant with a capacity to manufacture 1200 kilos of potato chips and caters primarily to suave consumers.

Around 250,000 people generate their income from this group, either directly or indirectly. As a matter of fact, 70% of their employees are women.

This group is a really unique company. Here, each member is treated like a ‘family member’. They are provided with a full meal at just INR 10. Also, this group is well known for its helpful nature. They stand by the side of their employees at the time of their needs.

The motive that this company has adopted is – ‘Value for Money’.  It ensures the affordability of namkeens by almost every individual. They prove themselves being cost-effective by selling the namkeens at low prices ranging from INR 05 – INR 30.

In addition to that, the group also has an enormous dominance in the western markets with a percentage of 70%. When it comes to India, in the markets of Gujarat only, it holds a share of 90%. And their popularity is not only localized to Gujarat but their yields, which are as high as 60, are equally popular in Rajasthan, Maharashtra, Andhra Pradesh, and Goa, too. Apart from this, the Balaji group is planning to raise funds worth INR 200-400 crores by selling not more than 15-20% risk factors of the company for future expansion. This includes setting up manufacturing plants. The company is also trying to enter the markets of northern and southern India in the near future using the investment. They will be looking at partnerships with the local players for starters.

Ernst and Young were hired by the group to find the best-suited investors. This gave them a great leap and around 15-20 investors have shown interest as well.

They tried a lot to get a deal with some of the biggest bodies such as PepsiCo, Kellogg’s, and Capital International Privet Equity Funds (CIPEF). However, due to various causes, the deal did not go through.

The business dropped the idea of stakes sale in 2014 due to such bad experiences. It began its preparations for an IPO and maybe raising roughly $400 crores from the fair play markets.

The name “Balaji” came into being because when they used to run the canteen, they used to keep an idol of Lord Balaji, which later got converted into a small temple. This is how God’s name got associated with the product. Failures faced by the brothers

Firstly, it was their fertilizers and farm implements industry. After that, they had also tried to run a boarding and lodging for college students but that too failed miserably.

His journey of becoming the owner of the Balaji Wafers

Chandubhai’s Balaji wafers’ business has come a long way from a small wafer trade which started in an eatery of small theater with one tawa to going on to making INR 2.4 lakhs in the first year’s revenues, finally emerging into an INR 4,000 crore company.

The fact behind their success is dependent on their knowledge, experience, and most importantly their failures which remain hidden in others' eyes. It is well said that “Smooth seas do not make skillful sailors.”

With time, they began to know exactly how many ingredients like spices, potatoes, etc. go into its making, and in what amounts to get its indigenous taste which is its specialty. Due to their attentiveness, several things are handled carefully like the quantity of oil used in the product and hygiene level. And because they are also careful about the tastes of the new generation, they have been able to make a place among the youth too.

Modernization of the plants

For the record, Bhikhabhai’s son Keyur Virani is an engineer. He has modernized the Rajkot and Valsad plants. The latter is in the process to go for total automation for which new machinery has been bought from Australia, Japan, Germany, and America.

Google May Soon Be Using Nearby Phones To Help You Find Your Lost Android...