One of the renowned Indian Television Actor Ajay Singh Chaudhary, who has been a part of blockbusters shows like 'Phulwa', 'Uttaran', and 'Rishton Ka Chakravyuh', now played the completely out of the world role of "terrorist" in the newly released web-series "CrackDown". Choose @VootSelect if you haven’t yet and watch out all the thrilling episodes. 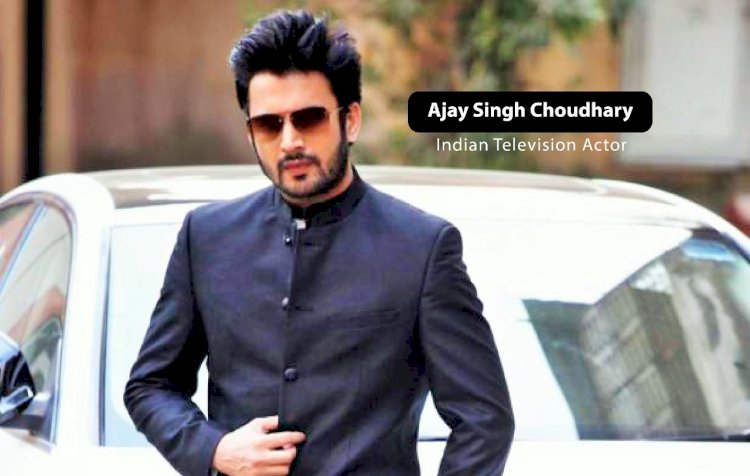 One of the finest Television Actor Ajay Singh Chaudhary comes across as a very intense and serious character role in his recent web series named "CrackDown". This actor never leaves a chance to entertain his fans with perfect masala TV shows or streaming movies.  He always gives 100% for all his roles. Now, Ajay Singh is desperately waiting for the audience reviews on the latest web series"Crack Down".

Apoorva Lakhia is a known director for making motion pictures like Shootout at Lokhandwala, Haseena Parkar, and Mission Istanbul to give some examples. 'Crackdown' cast incorporates the finest actors like Saqib Saleem, Iqbal Khan, Shriya Pilgaonkar, Rajesh Tailang, Waluscha De Sousa, Ajay Singh Chaudhary, and Ankur Bhatia in leading roles. The trailer of the show was circulated on September 17, 2020. The 'Crackdown' trailer gives a thought that the web series is a perfect combo of thrill and romance that revolves around the life of a couple of RAW operators. These RAW operators intend to reveal secrets that undermine the wellbeing of our nation.

On a personal front, he married Jyoti Makkar and have a sweet little girl child named Jiyana.  He is carrying out his personal and professional life in a very balanced way. So, it's a perfect time to know more about him. We come with the Indian Television actor Ajay Singh Chaudhary's exclusive interview. If you are looking for an inspiration to become a successful actor. Then you must know about his top secrets and prepare yourself to aired soon.

Let's have a look at the exclusive interview of Indian Television Actor Ajay Singh Chaudhary and feel inspired. Prepare yourself to hit the world with your acting and crafting skills. Myself Ajay Singh Chaudhary and belonged to the television industry. I am doing Tv for the last 12-15 years. I have done my master's in theater from Mumbai University. I have done many popular television shows.  Recently my new web series “Crack Down” launched on Voot and I am quite excited to know audience feedback. Get featured in the well-known director Apoorva Lakhia web series is a glad thing to experience.

How did you come to know about your interest in acting or modeling?

When I was in school at that time I realize my interest in acting. I used to take part in extra-curriculum activities like theater, acting, and drama. It is the time when I developed my interest in acting and modeling. I start doing more when friends and teachers appreciated me. And after schooling, when I was doing my graduation in Science from Meerut at that time I have decided to build my career in this Entertainment field. To attain perfection I did my post-graduation in theatre.

Tell me something about the struggle part of your journey to becoming an actor?

According to me, the struggle is something that is a part of every successful and non-successful people. And it is everywhere, it doesn’t matter what you want to be in life. Struggling is a phase of life, where you learn about something new and creative things. Struggle you can understand very well with another term called “Learning Phase”. Therefore, I want to recommend people to take the struggle in a positive way as it adds value to your character and life journey. But I didn’t face many struggles and I have got my first break very soon after completion of my post-graduation. After that, I never looked back If you believe there is a struggle absolutely you will find there. But if you start enjoying it, you will consider it as a part of the journey.

Have you faced any sort of nepotism in your life till now?

No, I didn’t face nepotism. In the television industry, there is no much nepotism. But I must say instead of nepotism you will face Favoritism here. But we can’t do much about it. We just need to work on ourselves rather than focusing on extra things. I personally believe there is no advantage of wasting your time on such feasible things like nepotism and favoritism. The best thing about the cinema is that the camera speaks everything. There is no need to speak out things; your duty is just to perform. So, crafting your skills is a smart option to work upon.

In How Many Television Shows You Have Performed?

There are multiple television shows in which I have performed.  And I have started my career with the show Love Story on SAB and after this, I have done many shows like Uttaran, Phulwa ( Colors ), Kumkum ( Star Plus), Behne, Sujata ( Sony ), and the last show I did Tenali Rama.

What kind of role do you want to do the most?

See, every role offers the opportunity to get better and better. It’s never like that we choose the role; it’s the role that chooses us. We need to develop the character to fulfill the disguise roles. But I love to play positive roles that have scope to make changes in other lives.

Who is your role model or ideal in the acting industry and why?

My role model was Irfan Khan Sir, but sadly he is no more. But he always inspired me what I am today. And I have been following him for many years. I have learned from his life journey and he works a lot. It’s quite difficult to express in words the gratitude that I pay towards him. He is a real man, whose acting speaks to the people.

What type of television shows do you love to act most?

Actually, it’s a choice of producer and director. It does not depend on us. It absolutely depends on them, they choose us according to their show cast demand. We as an actor get an offer and discuss the deal if we like the character and this is how things come in progress.  Personally, I love to act in television shows that must possess grounded reality/ Flavor of realism and people must able to relate it with them.

How do you work to improve your acting skills?

Improving our ability as an actor is a long process that essentially happens over the course of your life. As an actor, we need to work continuously by taking different measures to better our skill and craft. Luckily, there are many ways in which an actor can improve and grow. And experiencing the lives of multiple people is a real inspiration to improve acting skills.

What is your biggest accomplishment to date?

For me, accomplishment is really a different thing. I don’t love to record accomplishments in the form of awards or rewards. If I find myself one step ahead improved version, it is a kind of accomplishment for me. In simple words- Moving ahead day by day is a real achievement.

How your acting style is different from other actors in your industry?

Actually, all actors have something different to serve. In this way, I can say, my acting style is also different from others as I always try hard to get into the skin of the character and audience able to experience realism rather something dramatic.

What is the hardest role you’ve played, and how did you handle it?

Recently, I have played the hardest role of being a Terrorist in the newly launched web series “Crack Down”. This role takes me to different land as I have never played such a role. But I worked hard and try to inculcate the attitude of being a terrorist like I have worked on my voice, walking style, thinking pattern, etc. It is a wish of every actor to do justice with the given character. And I waiting desperately to have the audience reviews whether they are satisfied or not with it.

Fans are excited as your new web series “Crack Down” released yesterday. Please share some highlights about it?

What I say about it, I love to hear from the audience whether they like it or not. According to me, it’s a “spicy” or “masala” web series to watch out. And it is a shootout at Lokhandwala. It is a perfect combo of thrill, romance, action, drama, good storyline, etc. When you feel boredom, and looking for a rejuvenating thing, it is the best movie to play out.

Tell me about your adventurous activity.

For me, the best adventurous activity is to explore the world. I love to travel to a different land and explore native people and their dialects. And my favorite tourist destinations are Europe, Dubai, the US, and there are many more as every land has something different to offer.

Actually, there is no specific mantra to become a successful actor. The thing that matters is your dedication to your work. Assess yourself; craft your skills by choosing your role model. If you work dedicatedly, no doubt you will succeed one day.

Ajay Singh Chaudhary has indeed taken a huge challenge. And to portray a larger than life character of Terrorist would not be an easy task. But he has done with perfection.

Now to finish up, we always desire to know our sweet reader's response. I hope you must have enjoyed being reading this exclusive interview Renowned Television Actor Ajay Singh Chaudhary.

Busy Schedule and yet a healthy lifestyle...yes it's possible with 8 simple...

Google Has Discovered A Smart TV ‘Problem’ In India

Varun Dhawan Explains Why He Kept His Relationship With Natasha Dalal...