A lesser-known name – John Bissell is the proud founder of Fabindia – a chain of retail stores selling garments, furnishings, fabrics, and ethnic products, which are handmade by craftspeople across rural India. 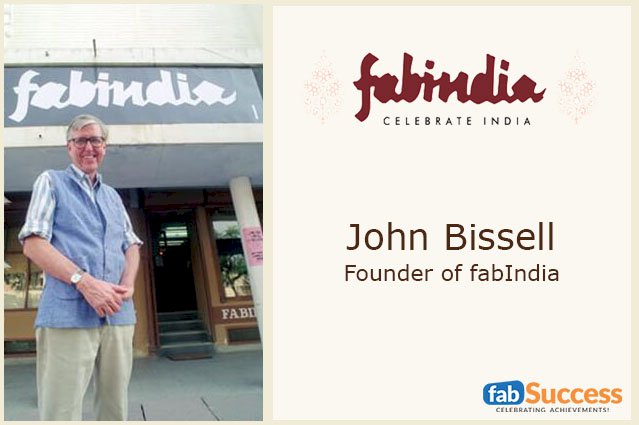 With over Rs.1500 Crores valuation, along with 90,000+ artisans and craftspeople and roughly 200 stores across India and abroad, Fabindia today is widely known to be and has successfully managed to boost rural employment across villages in India. Due to such a unique business model, the craft-conscious enterprise concept of Fabindia has also become a Harvard Business School case study. On the completion of 50 years of the foundation of Fabindia, they have also released a book depicting the journey of Fabindia called – “The Fabric of Our Lives: The Story of Fabindia”, written by Radhika Singh. Today, apart from his wife Bimla Nanda, John is survived by a son and daughter, William and Monsoon.

Originally, John belonged to Hartford, where his grandfather served as the President of the Hartford Fire & Life Insurance Company. John completed his education at the Brooks School in North And over and then Yale.

Since his childhood, John grew up listening to the stories from his father about India during World War II. And thus grew his love for India as well.

During this phase, he met Bimla Nanda, who was serving the then United States Ambassadors to India – Chester A. Bowles and John Kenneth Galbraith, as their Social Secretary. After his grant expired, John decided to get married to Bimla and stay back in India. And hence began a new chapter in his life!

During his early years, John went on to travel across India, more specifically, craft-based villages and towns, to meet and find weavers and entrepreneurs, who could produce flatweaves, pale colors, and precise weights in handloom yardage. After searching for a long time, he finally narrowed down to his perfect match and got A. S. Khera, a dhurrie and home furnishing manufacturer in Panipat, as their supplier.

With this move, they had also begun catering to urban India as well, and to stand apart from other government-owned and subsidized players in the handloom fabrics and apparel sector; Fabindia decided to adapt their own fabrics and designs accordingly to the urban taste.