Fans Gave A Thumbs Up To Laxmmi Bomb Trailer!

Kiara Advani's and Akshay Kumar starrer Laxmmi Bomb's trailer was out on 09-10-2020 and the social media was set on fire as fans started giving their reaction. 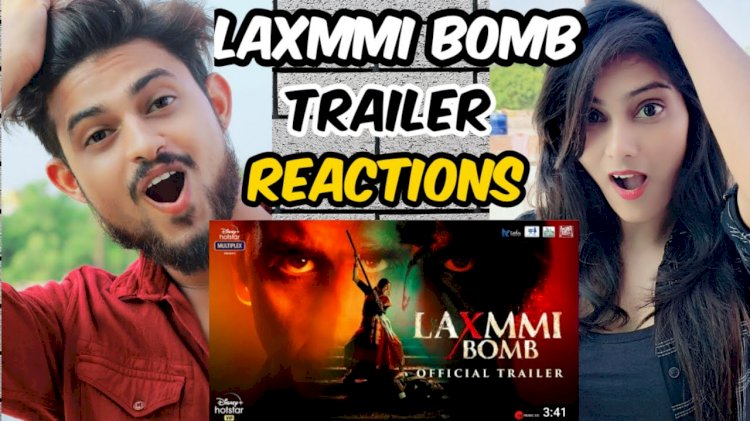 Akshay KUmar was the first actor who resumed shooting after the lockdown ended and completed the shooting of two of his much awaited films Laxmmi Bomb and Bell Botoom. After much anticipation and wait the trailer was finally launched on 9th OCtober 2020. The movie is all set for a Diwali release and the fans got hooked to social media to react to the trailer as soon as it was out. Also it reached nearly 10 million views in 24 hours on YouTube from the release of the trailer. Laxmmi Bomb marks the official remake of the critically-acclaimed Tamil film, Muni 2: Kanchana, popularly referred to as Kanchana. In addition to Akshay Kumar actors like R Sarathkumar, Lakshmi Rai, Kovai Sarala and Devadarshini also featured in prominent roles in the film. Second, Akshay is playing the role of a transgender in the film and the first look in itself was enough to pique the fans' interest. From North India to South India the trailer was an instant hit as fans started hailing their favorite actor's film on various platforms. Interestingly though, Akshay Kumar will be playing the role of a transgender in the film. The fans though complained as they were unable to see the likes and dislike views of the trailer on YouTube. This happened after fans started giving dislikes to some of the recently released films such as Sadak 2 and Khali Peeli. The theatres in various parts of India will start opening from 15th October and the makers finally decided to launch the trailer as the film is all set for a Diwali release. Not just fans his friends and co-actors from the industry too hailed Akshay's performance after watching the trailer. Actor Farhan Akhtar, and actress Tapsee Pannu were the first one to react on Twitter and then wishes started to pour in from the entire film fraternity. Akshay is always known for his hard-work and dedication and as soon as the lockdown ended, the actor started shooting and in no-time completed the shooting so that the makers can release the film on time. This is one of the main reasins why Akshay has garnered such a massive fan following on social media. The pandemic is still on and it will be interesting to see, how the actors find new ways to promote their film as apart from attending some reality shows, there's not much platform where the actors can go and promote their films. Let's take a moment and applaud the spirit that Akshay Kumar has shown in this time of pandemic and hope his film does well at the box-office and the other OTT platforms where it is scheduled to release in a month's time.

In Season 14 Bigg Boss 2020 Contestants Will Get To Enjoy 'pre-lockdown...

Hurry Up! Showcase Your Child In Tricolor On Occasion of Independence...

MediCAB, Foldable & Portable Hospital: Some Oxygen For India By IIT-M...

Dhamaka Movie Review: Kartik Aaryan Tries To Get Through Thriller With...