Kiara Advani This Festive Season Gives A Twist To The Saree Look With Her Rs 98k Sharara Saree!

Kiara Advani shared pictures of her look that she opted for the promotions of “Laxmmi Bomb” on instagram. She wore a sharara and bralette set designed by Arpita Mehta. 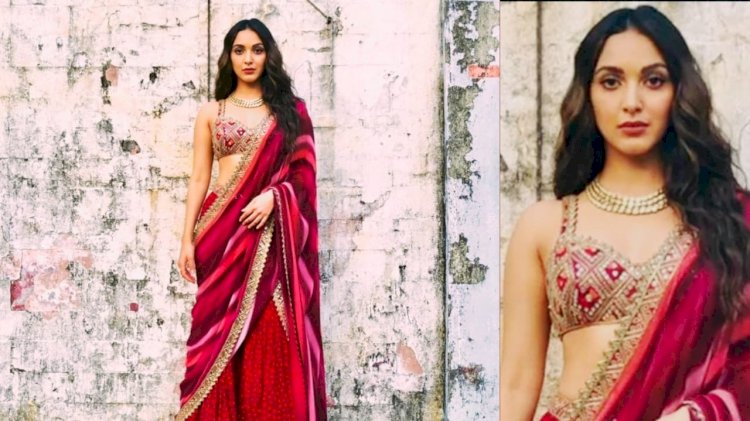 After the unlock many celebrities have now resumed their work. Kiara Advani is one of them. The actress shared pictures while she promoted her upcoming film Laxmmi Bomb yesterday wearing a berry blurred polka print with hand embroidery sharara. . She looked stunning in her new trendy look. She draped the dupatta like a saree pallu and looked like a diva.

The pictures took over the internet as she looked like a fairy in the berry-colored piece designed by Arpita Mehra which was worth Rs 98,000.

She set festive look goals with a mesmerizing Sharara-Saree look that she paired with a bralette. She gave her look a contemporary yet ethnic vibe by draping the blurred stripe dupatta as a saree pallu. The blouse did wonders to the look as the crepe and raw silk ensemble in the choli with mirror and sequin detailing gave it a rustic edge. The same work was done on the hem and waistline of the sharara and the border of the dupatta.

However, Kiara did justice to the look as she styled the ethnic look by with minimal accessories with a statement layered gold necklace, thus letting the dress do all the talking.

She kept her open with wavy-textured locks and middle-parting. For makeup, she opted for a berry-toned lipstick with matte make-up, eyes with heavy eyelashes, and mascara with smokey eye shadow, light bronzer, and natural brows. Overall the look came out to be too soothing for the eyes to see. She looked like a fairy out of a fairytale book.

Laxmi Bomb is already under controversy. However, Kiara is has geared up now for the Diwali release of her movie in the lead role.

The film would be premiering on Disney+Hotstar on November 9, 2020, and is directed by Raghava Lawrence. The movie features Akshay Kumar essaying the role of a man who gets possessed by three ghosts. In short, he is playing three characters in one movie! He will be seen as a transgender woman, a Muslim man, and a mentally challenged kid.

The Stock Market Boomed At A Record Level, Crossed 56000 For The First...