"Mitti Cool" a renounced & innovative brand of every damn thing that you wish to keep in your modern kitchen has every classical item that is handmade of terracotta.  No business gain popularity overnight, specially when a rural entrepreneur had a vision of being successful  with this unique concept.  It has its own saga of  learning, failure & motivation before it became something for what it is known today. 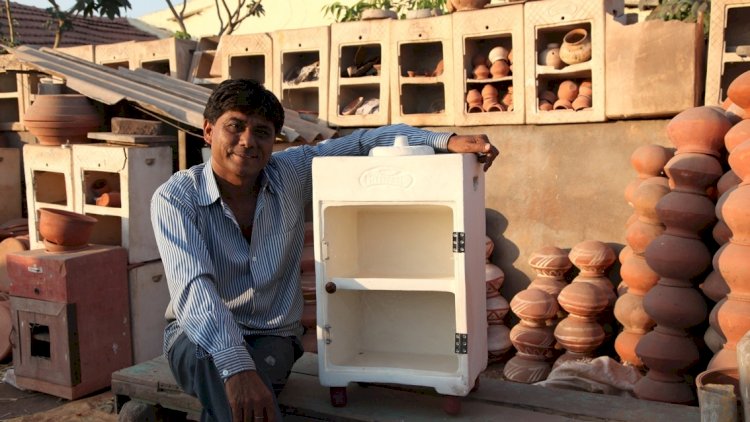 While everyone is thinking how and what should they be made to join the "Vocal For Local" errand, we have one such innovative story of a man who thought innovative in "desi" way & made business of Rs. 45 lakhs. If you had been wondering how basic you can get or what local you can offer through business, Manshuk Lal Prajapati went to the roots years back and decided to represent the country with its golden soil.

"Mitti Cool" a renounced & innovative brand of every damn thing that you wish to keep in your modern kitchen has every classical item that is handmade of terracotta.  No business gain popularity overnight, especially when a rural entrepreneur had a vision of being successful with this unique concept.  It has its own saga of learning, failure & motivation before it became something for what it is known today.

Manshuk, a 48 years old man born in potter's family in Gujrat had seen enough in his life. A failed business of parents, financial crisis lack of knowledge & education he himself failed in studies at the metric level. Survival was the only option left for him & his family so, an odd job as tea vendor was the source of his bread & butter. Somewhere he had not been able to satisfy his soul because of humiliation that was coming from his in-laws who were into toys business. Who knew a humiliation will act as a simulator for his brain to think at an entrepreneurial level? He joined as a worker in tile making factory as he knew from the age of 24 that his forte is in clay. He realized working there that if tiles can be made from clay then why cannot we make utensils from it?

He started experimenting with every little thing that we usually use in the kitchen. Appliances, pressure cookers, non-stick pans, water dispensers even the refrigerator, everything that he tried once is now an innovation. Once he realized that potters are so poor yet so desirable to own a refrigerator in their houses. People who cannot even bear the bill of electricity were desirable to own electrical appliances at home because of the need. That is when his very famous "Mitticool" refrigerator came into existence which was the only sustainable, reliable, innovative, and Eco-friendly appliance that ran on no electricity. It had the potential to keep the vegetable & other items fresh & healthy for up to 7 days. The temperature inside this clay fridge is almost eight degrees cooler than the room temperature. Vegetables remain fresh for over four days and milk for two. It is 26 inches long, 15 inches wide and 12 inches deep, and does not hog any space in the kitchen either. Those who have it, usually prop it up on their kitchen slabs.

The fridge works on a simple scientific principle. Evaporation causes cooling. The roof, walls, and bottom of this clay fridge are filled with water which evaporates overtime keeping the vegetables in this two-chambered fridge cool and fresh. Prajapati not only kept his ancestor's artwork alive but also gave them a tribute by his vision & hard work. Today, his products are so successful that he now has a row of factories with an assembly line production of myriad clay products. Big machines designed by Prajapati himself, mold the clay in seconds into pots and pans each of them produced in their hundreds to keep up with the rising demand. His products have also been acknowledged worldwide & the items are now also being exported.

Though the journey had not been easy for him constant learning, perseverance, patience & skills have given him an identity of an innovator. From getting numerous awards & recognition in India, former India president, Late Dr. APJ Abdul Kalam had also given him the title of scientist for working towards a better & sustainable India. Unlike any other entrepreneur who can't settle for low, Prajapati has another vision of Mitticool houses which can remain cool in summers & hot in winters.

Now if you are inspired with this achievement, feed your thought with entrepreneurial ideas!

How did a woman start a YouTube channel for exam candidates and create...

Captain Zoya Agarwal, the first Indian lady pilot who has flown for Air...

Rajkummar Rao And Patralekhaa Are A Sight Worth Seeing In The NEW Wedding...